BBQ: A Taste of the South 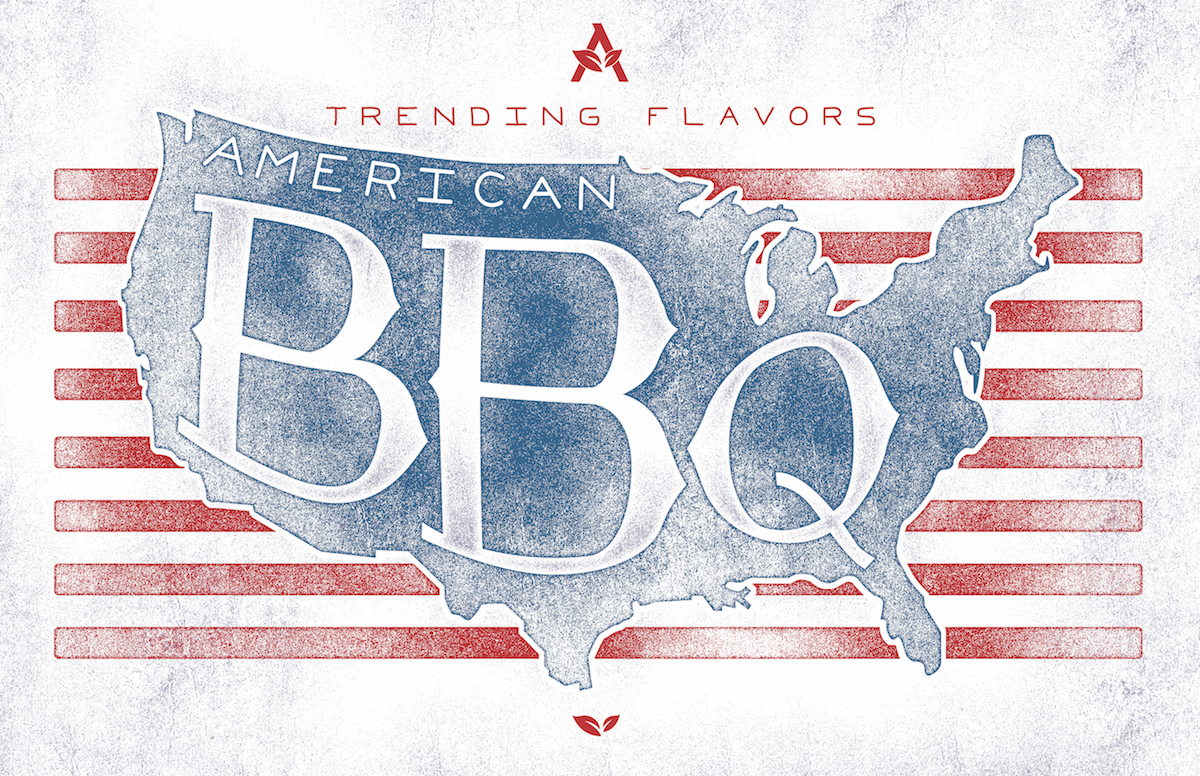 In the United States, the term BBQ means many things to many people. It can be something as simple as a technique, maybe a style of restaurant, or something as complex as a way of life that is handed down over generations. The generally accepted method of American BBQ is a technique of slow cooking the meat for a long period of time over very low heat using indigenous hardwood. This traditional method of cooking when done over an open fire is also referred to as “pit cooking” and delivers amazingly tender, moist products with distinctive smokey flavors.

The single largest identifier of the regions is the regional specific BBQ sauce that was developed over hundreds of years to serve with the traditional meat served in that region. Americans did not develop the concept of BBQ, but the origins of American BBQ are older than the country itself and it has become part of the fabric of our society. There is even documentation of our founding fathers attending barbecues as social events in the late 1700s. As the country began to expand South and West the settlers took this cooking technique with them. The climate, ample supply of hardwood and condition to raise livestock in this region helped barbecue thrive and firmly take hold. In the South, barbecue is more than just a style of cooking; it has become a subculture with wide variation between regions, and fierce rivalry for titles at BBQ competitions.

The core geographical area for barbecue is the southeastern region of the United States, an area bordered on the West by Texas and Oklahoma, on the North by Missouri, Kentucky, and Virginia, on the South by the Gulf of Mexico, and on the East by the Atlantic Ocean. While BBQ is found countrywide, this region contains 70 of the top 100 BBQ restaurants. While inside this area there are seamlessly endless styles and techniques, with six distinct American BBQ powerhouse regions that have meat, smoke, and BBQ sauce profiles specific to their areas.

Chart 1A shows that 46% of consumers enjoy heat, and another 36% are looking for authentic regional US products, two categories that American BBQ falls into easily.

Chart 1B explains how nearly 86% of people are looking for new and unique flavors, and the approach of an upscale comfort food such as American regional BBQ would speak to this crowd. Some 46% of respondents who use sauces, marinades, dressings, or dry seasoning mixes say they prefer spicy/hot flavors. Nearly four in 10 say they prefer sweet flavors and a third prefer salty flavors. Nearly four in 10 say they prefer authentic US regional flavors
(with nearly a quarter preferring locally made), while almost the same percentage prefer international/ethnic flavors. These results underscore
the need for brands to offer a wide variety of flavors – keeping up with trends consumers encounter in other food areas – to meet their demand for interesting tastes. Nearly four in 10 respondents self-identify as foodies. This presents brands with an opportunity to show how their products offer a wide range of flavors and styles that align with foodies’ interest in new and unique flavors and cooking styles. Premium/gourmet/artisanal brands are likely to hold significant appeal for these types of consumers, as are those that offer ethnic/international flavors or authentic US regional styles. Info: If you live in the Midwest this is what you think of when you think of American BBQ. It is thick, rich, and boarding on a heavy tomato characteristic sauce. It is meant to coat baby back ribs and the meat and drive the flavor in the dish. Due to the high sugar content the sauce is always applied at the end of the cooking phase to prevent burning. This style sauce is not commonly found in the southern regions as they feel it is too sweet and thick.

Meat: With all the railroads leading into KC, it quickly became a meatpacking power house, all varieties of meat are commonly found in establishments.

Characteristics: Kansas City sauce was developed to accommodate all the different meat sauces and is the most versatile of all the regional BBQ sauces. A thick, sweet molasses and tomato sauce that sticks and sits on top of the meat characterizes this BBQ sauce recipe. Info: Memphis, TN is home to the BBQ world championship, ‘Memphis in May’. Every year more than 500 competitors from all around the globe gather on the banks of the Mississippi River to vie for the title of grand champion. ‘Memphis in May’ is focused on the whole hog although it also has individual competitions for red sauces, mustard sauces and mops.

Characteristics: Thinner tomato based sauce with a moderate kick. Contributing ingredients tomato product (paste or ketchup), hot sauce, vinegar, and sugar. The barbeque sauce coats the meat, but does not cling or sit on top; it is more to add tang, heat, and moisture. The sauce is a little more vinegary to go with the fatty pork meat, acting more as a balance than just tang. This sauce or variations of it can be widely found in the Carolina BBQ joints; they often refer to it as the “sweet” sauce. Info: To the rest of the country it is easy for us to try to group the Carolinas together when it comes to BBQ. However, they have some similar characteristics and they have some very distinctive differences. North Carolina is divided into an east and west territory with slight differences in the sauce; the mop is eastern and the western is similar to a mix of the mop and Memphis. North Carolina is focused on the whole hog and uses a very thin sauce to add moisture. It is not uncommon to find fruits and fruit juices in their mops as the sugar portion.

Characteristics: This is a vinegar and pepper sauce, and often referred to as a “vinegar mop” or just plain “mop”. It is applied liberally during the cooking process and soaked in it after it is pulled. Basic ingredients are cider vinegar, sugar and chili flakes. This sauce is thin and adds a lot of moisture and flavor to the pulled meat. The sugar is added to slightly curb the vinegar and the vinegar acts as a balance to the fattiness of the pork. This BBQ sauce is designed for pulled pork and the fattiness that comes with the product. Info:  South Carolina similar to North Carolina is broken into sub regions. When talking to a local they may describe three internal BBQ areas mainly differentiated by the BBQ sauce they use. The western part uses a thinner tomato, mustard-base sauce, the central and largest region uses the mustard or golden sauce, and the coastal section uses a mop similar to the North Carolina sauce.

Characteristics:  Frequently called Mustard sauce or Carolina Gold, the South Carolina sauce gets its distinctive color from the use of prepared American mustard (yellow mustard) as its base ingredient. Common additives to the mustard are brown sugar, black and cayenne peppers, and cider vinegar. The barbecue sauce traditionally has a medium body and while not as thin as a mop it is not so thick that it just sits on top and clings to the meat. It is a balance of tangy, sweet, and heat. This sauce can be added to the meat at the tail end of the BBQ grill cooking process and or served at the table as a condiment. Info: While Alabama does use many types of sauces, they are able to boast of the unique white sauce version. The white sauce is never put on the meat while still over the fire; it is always served on the side and often found in bowls on the tables. Big Bob Gibson is credited with coming up with the barbecue sauce in his restaurants located in Decatur but many in the region have copied this unique sauce. Locals from Alabama will joke that while chickens are born and raised on a farm, they are baptized in the Alabama white sauce.

Characteristics: Alabama will have a few other tomatobase sauces similar to South Carolina. In the BBQ circuit they are most widely known for their white sauce. Key ingredients are mayonnaise, horseradish, cider vinegar, lemon juice, and cayenne pepper. Info: Texas loves their BBQ; it is almost a matter of pride that they do not, as they would put it, “drown” their meat in sauce, saying that it is good enough to stand on its own. Next to chili, barbecue is the other food that the large state of Texas is best known for. They focus on beef products and this is where you will find the popular “BBQ beef brisket” on just about every BBQ menu in the large state. Another unique item found in Texas BBQ restaurants that you do not see often outside the region is BBQ sausages. You place your order by the meat type and sausage is almost always an option here. Hint if traveling in Texas: ask for the “burnt ends”. They are the dark, crisp corners of the brisket that got more smoke that the rest. Burnt ends are rarely on the menu and are often reserved for the cooks, but if you ask nicely and they have extra they will gladly sell them to you.

Characteristics: Sauce in Texas is an afterthought; they
focus on the meat and the BBQ dry rub. They have a few red
sauce options but the sauces will be well suited for beef as it is
the main meat of choice.

The technique of barbecue may be one of the oldest cooking styles in the world, but Americans have made a distinctly unique version to call our own. It is easy to see how effortlessly these six uniquely different regions and profiles are ripe for a retail world that is hungry for both new and traditional American flavors. The spiciness and new feel of many of the different sauces will attract the millennials just as the well-balanced profiles of vinegar, salt, sweetness and spice will appeal to the baby boomers.

Odd as it may seem, these styles are as different as they are similar and because of that they can be a powerful tool to help you differentiate a new product. You will obviously give a consumer confidence with a call out they understand, but at the same time you can capture their imagination by giving it a twist that is new to them. Point in case: “BBQ chicken” is generic and will get noticed; however, it can easily get lost in the crowd. “BBQ chicken with Alabama white sauce” or a “South Carolina Gold BBQ chicken” on the other hand will both seem unique and appealing while in reality are all selling the same type of product. These six regions provide an extremely satisfying, fun, and safe adventure into American regional cuisine and history that will be widely accepted across many generations and many food preferences.